An Address on Liberty by Rev. Richard Furman, D. D. This Revolutionary War document was originally produced November 1775. This shows the Baptist involvement in patriotic declaration to the upcountry South Carolina and the address seeks to convince fellow citizens of their justifiable resistance against the Crown. This is a sort of South Carolina "Declaration of Independence. " This famous Baptist minister was politically involved. Furman was a favorite preacher to Patrick Henry of Virginia. 10 pages
View More... 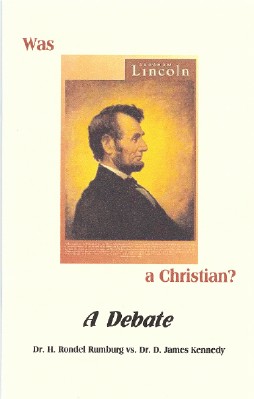 Was Abraham Lincoln a Christian? A Debate

The material in this booklet was used in a debate at Liberty University’s Civil War Seminar. The debate centered on the question, “Was Abraham Lincoln a Christian?” Dr. D. James Kennedy took the pro position and Dr. Rumburg took the con position. This is a real hot button issue. 28 pages
View More...